Oyster Pond and Our Conservation Land

Oyster Pond is located within the Town of Falmouth at the southwestern end of Cape Cod, Massachusetts. It is separated from Vineyard Sound by a barrier beach on its southern shore.

OPET owns nearly 30 acres of conservation lands comprised of Zinn Park and the Headwaters of Oyster Pond. These properties encompass wetlands, woodlands, vernal pools and pond shoreline. OPET purchased these lands to protect this beautiful area and to protect the health and water quality of Oyster Pond. 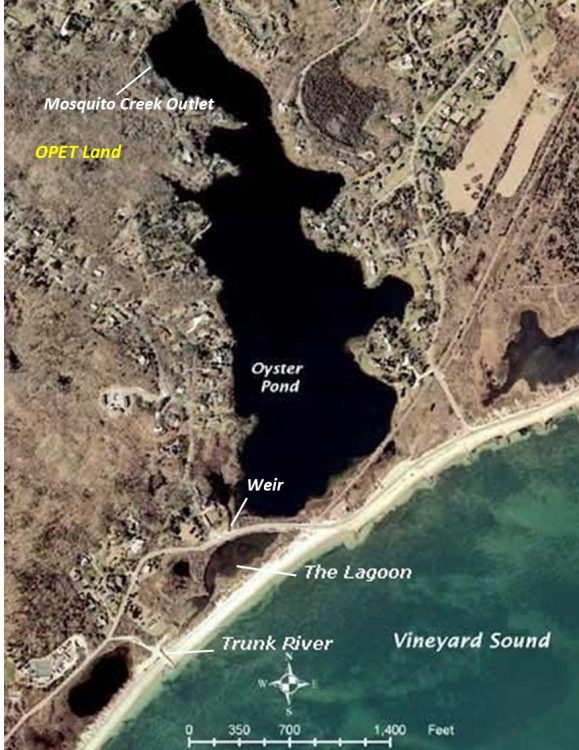 Oyster Pond is a 62-acre shallow coastal salt pond comprised of a series of kettle ponds that were flooded by rising sea levels at the end of the last glacial period. In its geologic past, the pond was both a bay and an estuary. The pond drains into Vineyard Sound via a culvert under Surf Drive into a small, shallow marsh we affectionately call the “Lagoon” and then into Trunk River and out to the Sound.

The Wampanoag, also known as the People of the First Light, were the first to live in this area. There are scant relics of their time on Oyster Pond. Maize pollen was found in pond sediment core samples taken by Dr. Jeff Donnelly.  This is evidence that corn was growing on the shores of the pond by the late 1400s.  By 1665 rye pollen starting appearing in the cores, an indication that Europeans started farming in the area.

A “midden” was uncovered during the construction of the Treetop condominiums in early 1978.  Middens are “trash dumps” of shells, bones, and other debris.  This midden contained a mixture of mollusk shells (oysters, soft clams, and bay scallops) animal bones, Native tools (chisel, arrowheads, a bearing for a bow and an adze) and European origin artifacts (pieces of clay pipe, handmade nails, steel knife blades, piece of blue and white china and cheap earthenware pottery).  Unfortunately, due to the disturbance, it was impossible to know if the contents of the midden were stratified over time or mixed at the time of disposal.

Historically, the number and location of Oyster Pond’s connections to Vineyard Sound has changed and fluctuated over time, depending on the ferocity of winter nor’easters and hurricanes. Geological evidence shows there were up to three outlets at one time. Once the railroad to Woods Hole was completed in 1872, the outlet of Oyster Pond was fixed to Trunk River. Sometimes during extreme weather events, such as hurricanes, water from the sound will wash over into the pond.

In 1990, the culvert through which Oyster Pond drained into the lagoon collapsed.  It was replaced by a larger culvert, which unfortunately allowed much more salt water into the pond than before. Salinity levels skyrocketed from 5 ppt up to 30 ppt.  It was so high, barnacles were growing on the Treetops’ dock.  The high salinity levels caused a precipitous drop in the fish populations, water column stratification and a massive growth of aquatic plants.

A weir was installed in 1998 to control the amount of saltwater entering the pond.  It is designed to maintain the salinity levels at between 2 – 4 ppt (parts per thousand).  By comparison, the salinity of Vineyard Sound is 32 ppt.

One of OPET’s biggest management issues is keeping the pond’s connection to the Sound via the Trunk River open and flowing.  Storms are a constant challenge as they bring in fine sands and dead eel grass that clog both the river and the Lagoon.  The connection between these three water bodies is a delicate balancing act that requires constant monitoring to ensure there is sufficient flow out of the pond to maintain safe and open passage for the pond’s resident herring population, prevent algal blooms in the lagoon, avoid flooding basements, and maintain targeted salinity levels between 2 to 4 ppt.

The “headwaters” of Oyster Pond and the only surface freshwater source to the pond comes from the aptly named Mosquito Creek.  It drains from a wetland system in Zinn Park.  It empties into the pond via a culvert under Ransom Road.

Are There Oysters in Oyster Pond?

No, the salinity levels in Oyster Pond are too low (2 – 4 ppt) to support oysters which need levels between 22 to 32 ppt to survive.  Oysters began disappearing from Oyster Pond in the 1700s.  Before that, there was an abundance of oysters, hence the name Oyster Pond.  Their disappearance prompted the formation of one of the first Town of Falmouth committees in 1767 and again in 1773.  The committees were tasked to find a solution to the problem of the disappearing oysters.  In 1804, town records show that an individual was even hired at Town expense to manage the area for a time.  All was for naught, though, as the oysters continued to vanish, most likely due to falling salinity levels as storms closed off Oyster Pond’s connection to Vineyard Sound.

OPET owns nearly 30 acres of conservation lands comprised of Zinn Park and the Headwaters of Oyster Pond.  These properties encompass wetlands, woodlands, vernal pools and pond shoreline.  OPET purchased these lands to protect this beautiful area and to protect the health and water quality of Oyster Pond.

Zinn Memorial Park was dedicated in 2001 to the memories of Donald and Eleanor Blevins Zinn who were avid nature-lovers and strong supporters of OPET.  In 2015 the Headwaters was purchased from the Woods Hole Oceanographic Institution (WHOI). Dr. Holger Jannasch, an eminent scientist at WHOI, and his wife Friederun, donated the Headwaters land to WHOI in the 1990s.  Their intent was for the woodlands to be used for young scientists’ housing while the wetland areas were preserved for conservation.  OPET’s purchase met both of these goals.  Now all of the property is protected under a conservation restriction agreement with the Town of Falmouth and the proceeds were used to build housing on the WHOI campus.

Zinn Park and the Headwaters of Oyster Pond play a critical role and out-sized impact in preserving the water quality of Oyster Pond. The properties drain into the only surface water source to the pond – Mosquito Creek – which empties into Oyster Pond via a culvert under Ransom Road.  Protecting these properties from development helped to protect the pond’s already impaired water quality.  Just like other estuaries on Cape Cod, Oyster Pond is suffering from the impacts of excess nutrients from too many septic systems in its watershed.

OPET’s conservation lands together with Spohr Gardens, a non-profit garden open to the public, create a 34-acre block of preserved land in a settled residential area.  This contiguous space allows for unobstructed movement between diverse habitats of upland and wetland communities necessary for foraging, breeding, shelter and overwintering protection for mammals and birds. (Watch our wildlife videos from cameras placed around our properties). Over 200 species of birds utilize the marshes, forests, thickets, and open water surrounding Oyster Pond for breeding, migratory stops and overwintering.  Over 120 varieties of plants grow here providing food, nesting material and shelter for migratory and resident birds, amphibians, and mammals.   These include priority species of concern such as the ovenbird or eastern wood-pewee as well as birds on the state’s endangered list such as the Peregrine Falcon.  A portion of the Buzzards Bay Moraine runs through the properties and some areas are littered with glacial erratics.

Brian Switzer Video made this video for OPET in 2015 when we were still raising the $2 million to purchase the Headwaters property.  Luckily, thanks to many generous donors, we bought the land in 2016.  This video is still a wonderful overview of the value of our conservation land so still worth viewing.

The canopy layer of the woodlands on the properties includes a variety of oak species, white pine, American beech, with some pignut hickory trees.  There are also a few mature old Scotch Pines, perhaps evidence that the property was once cleared for pasture land.  These exotics may have been planted by Joseph Story Fay.  Concerned with the denuded landscape in Falmouth, Mr. Fay began planting trees all over town in the early 20th century.

The understory includes a mix of highbush blueberry, arrow-wood, sheep laurel and sweet pepperbush to name a few of the shrubs. Some of the groundcovers on the forest floor include starflower, Canada mayflower, wild sarsaparilla, yellow stargrass.  The best time to view these ephemerals is in early spring before the trees leaf out.  Pink lady’s slippers are another late spring treat. Look for them along the pathways where there is a bit more sunlight.

In the Red Maple Swamp, the trees are festooned with lichen, due to their proximity to the coast and Quissett’s moisture- laden atmosphere. In the  wettest  areas  there is some sphagnum, as well as other mosses, along with cinnamon and royal ferns along with swamp candles.

There are two vernal pools on the properties.  Vernal pools are ephemeral wetlands, typically full of water in the early spring, that can be completely dry by mid-summer. These temporary wetlands are home to unique species that depend on them for critical life stages while living in the surrounding uplands the rest of the year.  Wood frogs have been heard in both pools.  Several egg masses of yellow spotted salamanders are seen in both pools every spring.   Both vernal pools are officially certified by the Massachusetts Natural Heritage and Endangered Species Program

It is fortunate that OPET protected not only the vernal pools, but the also the surrounding woodlands. Salamanders and wood frogs are dependent on vernal pools for breeding sites, but for the rest of the year they live in the upland forests, sometimes at a distance of 1,000 feet or more from the pool.   The protection of these lands conserved both the year around and breeding habitat for these fragile creatures.

A Vernal Pool spring chorus with the distinctive “quacking” call of wood frogs.  A few spring peepers can also be heard. 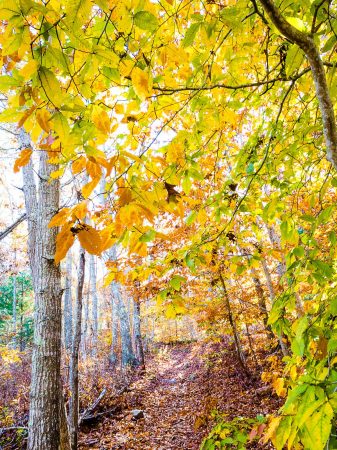 Beech trees with their beautiful golden hues in the fall. 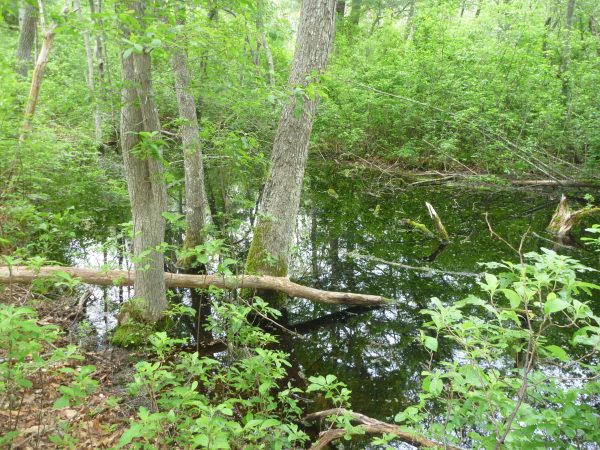 One of the vernal pools full of water after a particularly wet spring. 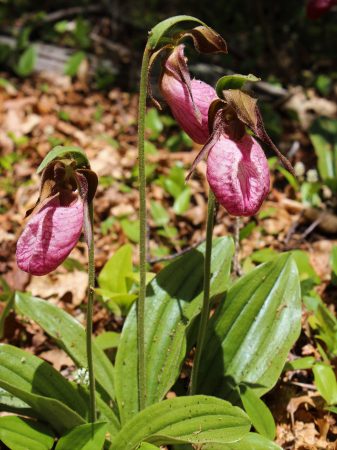 Keep an eye out for pink lady slippers during the last week of May. They typicallys grow along the pathways where there is a bit more sunlight. 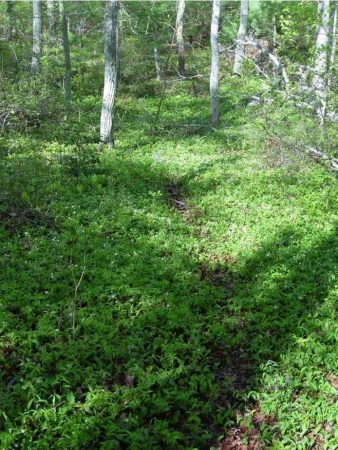 A carpet of spring emphermals.

OPET is dedicated to: